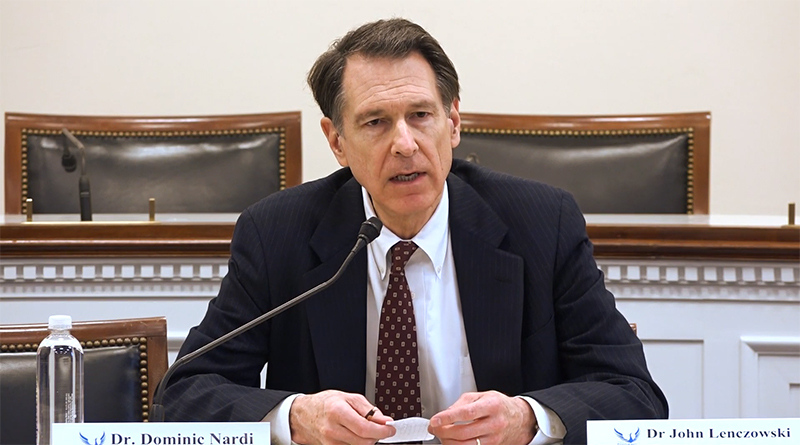 I would like to share with you some very brief remarks that I recently gave on Capitol Hill to commemorate Human Rights Day. The forum focused on shining a light on the serious human rights abuses that have been taking place in China (particularly the massive harvesting of organs, where political and religious dissidents are murdered in order to supply their organs for transplant operations). The forum also highlighted the Tuidang Movement, in which people have been withdrawing from any association with the Chinese Communist Party. Letters and speeches from several Congressmen were presented, and several survivors of persecution in China testified about their experiences.

In my remarks, I noted that the Nixon-Kissinger strategy of pitting China against the Soviet Union led to a moral strategic confusion by giving the American people to believe that there are “bad communists” (the Soviets) and “good communists” (the Chinese). At the center of a communist regime lies the fact that it is illegitimate: it rules without the consent of the governed. An illegitimate regime has reason to fear its own people, and this fact leads to a massive internal security problem. China deals with this through such measures as the Laogai slave labor camps, various persecutions, and controlling the thoughts and speech of its people.

I noted that there are two ways to resist this sort of regime. One is to do what the people in the Tuidang Movement have been doing: to opt out of the Party and to stop repeating the official falsehoods of the Party line, which are the method of thought and speech control. The other is to bear moral witness by telling the truth about the regime. This is a role that those of us on the outside must take on, in order to give hope to the people of China and let them know that they are not alone. Those people are our greatest allies in our efforts to protect ourselves from the threats posed by the Chinese communist regime.

At IWP, we prepare our students to understand the realities of the world – like the reality of the brutal persecutions in China – and to be prepared to tell the truth, even if it is unpleasant. We hope that all IWP graduates will bring this knowledge and courage to their roles, whether in government, the private sector, education, or elsewhere.

Your support makes this possible. Thank you for your friendship to our school and involvement in our important mission.

With all my best wishes,

John Lenczowski
Founder and President
The Institute of World Politics