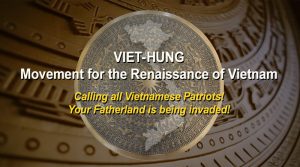 We are a movement of mature, credible, educated, capable patriots. Credibility is paramount to winning public opinion and media coverage.  We will not make outrageous statements or rash claims.  We speak from the heart, with facts to support our assertions.  Authenticity is important.

To us, every person with even one drop of Vietnamese blood in his/her veins has the duty to repulse the Chinese invasion immediately. This is a multi-generational struggle and we are composed of multiple generations of supporters. Nobody has the right to sell/give away even 1 square inch of Vietnamese land to another country.

In 1990, the Vietnamese Government signed the “ChengDu Agreement” with  the Chinese Communist government.   This lop-sided agreement has ceded economic interests and territory to Communist China.  Throughout Vietnamese history, we have resisted Chinese assimilation and domination.  The struggle against their imperialism continues even today.

Movement for the Renaissance of Vietnam (MRVN) is a core group of overseas Vietnamese with the mission to support the resistance to the Chinese invaders.

We believe the resistance has to come from within Vietnam itself.  We believe with enough awareness and publicity, groups will form within the country to move it away from Chinese domination.

Our initial slogan is: “Đuổi Tàu Cứu Nước” (Drive out the Chinese.  Save Our country.)